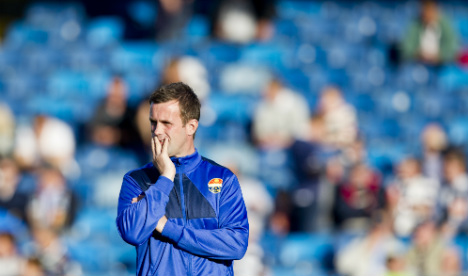 The 38-year-old former defender takes over from Neil Lennon, who left the Scottish champions two weeks ago after four years in charge.

"I will treasure this opportunity and will give everything I have to achieve success for Celtic and our wonderful fans," said Deila, who guided Strømsgodset to their first title in 43 years last season and won the Norwegian Cup in 2010.

"Celtic is in great shape and the club has enjoyed real success in recent years due to the hard work of Neil and his team.

"I want to carry on this work and continue to bring happy times to Celtic. I can't wait to get started on this journey."

Deila will be presented to the press later on Friday.

Although not the 'big-name' boss many of the Parkhead faithful had been hoping for, Celtic chief executive Peter Lawwell was confident Deila would enjoy success with the Glasgow giants.

"Knowing that he was so highly rated across Europe, Ronny was one of the first candidates we considered as manager and having discussed the opportunity with him at length, we are convinced he has the talent and the determination to deliver very positive results for the club and our supporters," Lawwell said.

"Ronny likes to play attacking, winning football, the Celtic way, something I know our supporters will endorse.

"As the new season begins, I am sure our fans will get right behind Ronny and the players once again as we aim to bring success to Celtic and continue to deliver a club they can be proud of."

Deila's appointment came after former Manchester United and Celtic midfielder Roy Keane had reportedly turned down an approach from the Hoops.

The 42-year-old Keane, now the assistant manager of the Republic of Ireland, spent the second half of the 2005/06 season at Celtic after his controversial exit from Old Trafford following a falling-out with United manager Alex Ferguson.

He played only 13 times for the Hoops, but managed to help them win the Scottish title before retiring at the end of the season due to a long-standing hip injury.

Former Sunderland boss Keane has been looking for a managerial role since leaving Ipswich in 2011.