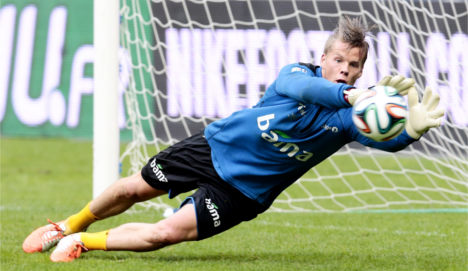 Oliver Håskjold Nyland training at the Stade de France in Paris on Monday. Photo: Håkon Mosvold Larsen
Norway's players held their own in the first half, keeping the pressure on France without managing to turn their possession of the ball into a goal. In the second half, however, the team visibly lost energy and force.
"Football is about results and they have been miserable under Høgmo," said TV2 football commentator Øyvind Alsaker. "We lack a striker who can score goals, and we're also historically bad in defence."
Norway was knocked out of this year's World Cup in the qualifying round, after it drew with Iceland on October 16, shortly after Hogmø took over.
The Paris defeat began with a goal by French striker Paul Pogba, after which Olivier Giroud scored a double, and Loic Remy his  first international goal since 2011.  in the first of France's
The game was one of three friendly warm ups for France before the World Cup.
"We are not yet ready, but there is a collective hunger and a real togetherness about them," said French coach Didier Deschamps, who himself captained France to their 1998 World Cup victory. "It is good what we did tonight. One mustn't lose sight of our ultimate target but our performance reflected the work we have already done."
France made a promising start as Antoine Griezmann and Giroud both tested Norway goalkeeper Orjan Nyland with headers inside the opening few minutes.
Griezmann again came close to putting the hosts in front when he redirected Yohan Cabaye's bouncing effort just wide of the far post, but it wasn't long before France found the breakthrough.
Mathieu Valbuena clipped a cross into the box and Pogba was on hand to send a stooping header beyond a helpless Nyland to give Les Bleus a 15th-minute lead.
The Juventus midfielder came close to a second shortly after as he fired narrowly wide from distance before France goalkeeper Stephane Ruffier, winning just his second cap as a stand-in for Lloris, held a low fizzing strike from Norway's Alexander Tettey.
Saint-Etienne keeper Ruffier, whose international debut came in a 2-1 defeat against the same opposition four years ago, then stuck out his right hand to deny Tom Hogli.
However, the Norwegians, ranked joint-55th in the world, found themselves overmatched in the second half as Arsenal striker Giroud drilled in a second on 51 minutes before the hosts rammed home their superiority.
Remy, who had only just come on in place of Griezmann, ran onto Newcastle teammate Mathieu Debuchy's wonderful through ball and slotted home a third on 67 minutes.
Giroud then doubled his tally, again combining well with Valbuena, as he sent an excellent looping header into the far corner to cap a resounding win two minutes later.
France will next head to Nice to play Paraguay on Sunday before making the trip north for a friendly with Jamaica in Lille on June 8.
They kick off their World Cup campaign against Honduras in Porto Alegre before facing Switzerland and Ecuador in Group E.