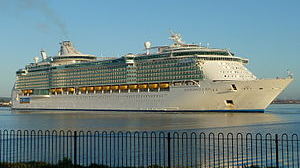 Independence of the Seas at its home port of Southampton. Photo: Aztec06/Wikimedia Commons
The Independence of the Seas, at 154,407 gross tons, is one of the largest passenger vessels ever built, costing the company $828 million to build. Its 15 decks can accommodate 4,370 passengers and 1,360 crew.
But this did not stop the plucky official arresting the vessel.
According to The Norwegian Coastal Administration (NCA), which ordered the boat to be seized, Royal Caribbean owed it some 600,000 Norwegian kroner which should have been paid in mid-October last year.
"We usually get the money on time. But now we're short 7.6 million kroner from cruise ships that did not pay their bills for the previous season," Arve Dimmen, from the NCA, told Norway's NRK news channel.  "It's a lot of work for us to follow up these cases. The ships are often based overseas, and it depends on the season when they visit our area."
The ship's captain contacted Royal Caribbean immediately once the ship had been seized, after which the money was paid to NCA within an hour.