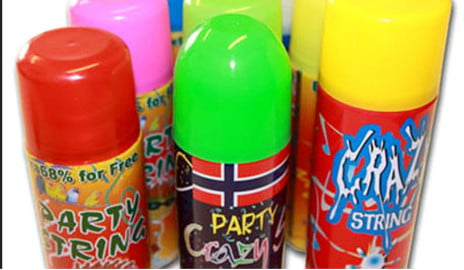 Do not bring these offending sprays out on the streets on Saturday. Photo: Norwegian Environment Agency.
Police in Oslo plan during Saturday's May 17 celebrations to target people using environmentally harmful confetti spray or selling unlicensed helium balloons, seizing the offending materials.
"First and foremost, it is because the propellant gases in the cans are deemed polluting by the Norwegian Environment Agency," Bjørn Åge Hansen, the head of Oslo's central police station, told VG newspaper.  "In addition, it is causes problems if it is sprayed on walls or on clothing. If, for example, you get it on your bunad costume, the dry cleaning bill could get up to 1,500 kroner."
Hansen also warned Oslo revellers to moderate their intake of alcohol.  "It is important to remember that May 17 is also Children's Day," he said.