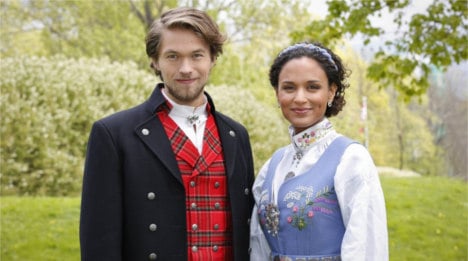 Jakob Oftebro and Haddy N'jie dressed up in Norwegian national costume. Photo: NRK
The actor, who has starred in some of Norway's biggest recent films, such as Kon-Tiki, Max Manus and Victoria, will be presenting alongside the singer songwriter Haddy N'jie.
The 28-year-old told NRK that the day's celebration would be the first time he had ever worked as a television presenter.
"I've never done anything like this before!" he said. "I was initially supposed to be just reading a text at Eidsvoll at an event on 15 May, but was in the process I was asked if I would like to have a "package solution" and wanted to be a presenter on 17 May. And that's what I decided to do," he said.
Oftebro said he was comforted by the fact that Haddy, his presenting partner had so much experience.
The celebrations will see performances by Sissel Kyrkjebø, the Norwegian soprano and hip hop artist LidoLido.