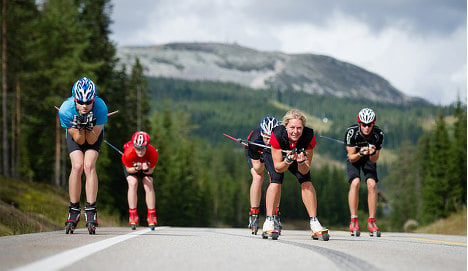 Rollerskiers in Norway. Photo:
The journalist and cross-country skier Peter Soleng Skinstad  received a threat by email on Tuesday, after he advised his fellow roller-skiers to ski boldly down "the middle of the road" when out this summer.
"I hope I meet you on your roller skis in the middle of the road," the email read. "Then we'll see who really gets hurt and ends up lying repentant in the ditch."
Skinstad enraged Norway's frustrated motorists with an article on the cross-country skiing website Langrenn.com titled "Go right down the middle of the road".
In the article, he admits that the recommendation is "provocative, but nonetheless serious."
"The biggest problem on Norwegian roads is not that they are used by motorists, cyclists and roller-skiiers," he argued. "The biggest problem on Norwegian roads is the number of fatal and other serious accidents, where soft road users always come off worst."
He said that rollerskiiers should adopt the same rules as cyclists or mopeds, positioning themselves in the middle of the lane with a good distance both from the hard shoulder and the central line.
"Then you will force vehicles to go out into the oncoming lane, which will prevent them overtaking when traffic is coming the other way at the same time," he said.
Skinstad told Dagbladet that he believed the current road guidelines, which encourage rollerskiers to hug the hard shoulder were "wrong".
"Rollerskiers must have their rightful place in traffic," he told Dagbladet newspaper. "I think there is a lack of clear rules for what kind of distance you need to have to rollerskiers as a motorist. And of course, it goes the other way too. Wee need clear rules for rollerskiers, that it becomes mandatory tp wear jackets and helmets, and so on," he said.
Skinstad has forwarded the threat to the police, who are currently considering whether to track down and prosecute the sender.
"This shows how heated a discussion about something as unimportant as rollerskiing can be," Skinstad told the newspaper.