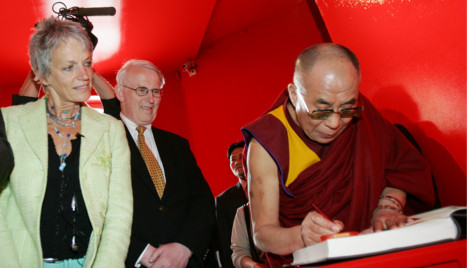 The Dalai Lama writes his name in the guestbook at the Nobel Peace Centre in Oslo in 2005. Photo: Håkon Mosvold Larsen/SCANPIX

"The government today decided that no representatives from the Norwegian authorities would meet the Dalai Lama when he is visiting Norway," Foreign Minister Børge Brende told Norwegian newswire NTB.

When asked for the reason of the decision, he said it was due to "the absolutely extraordinary situation between China and Norway" which have not had "any real political contact" for several years.

Political relations between Beijing and Oslo plunged to a low after Chinese dissident Liu Xiaobo was awarded the Nobel Peace Prize in 2010.

Chinese leaders froze high-level contacts with Norwegian counterparts, and Oslo's attempts to normalise political relations with the world's second largest economy have since proven fruitless, as China wants to set an example to deter other countries.

Norway's decision came after the Chinese government issued a new warning this week that Beijing is "firmly opposed to other countries providing a platform for the Dalai Lama's activities that aim at dividing China".

Beijing considers Tibet an integral part of its territory and regards the Dalai Lama as a separatist.

The Tibetan spiritual leader is expected in Norway from May 7 to 9, having been invited by pro-Tibetan groups to commemorate the 25th anniversary of his Nobel Peace prize.

Svein Melby, a Norwegian expert in international affairs, said in a tweet that Oslo's decision sets "a dangerous precedent that undermines the right to decide ourselves who we want to visit our own country."

Public opinion is also firmly against it.   According to a survey published by the tabloid Verdens Gang, 60 percent of Norwegians thought the government should meet the Dalai Lama and 50 percent said it would be "cowardly" not to do so out of consideration for Beijing.    Despite the diplomatic freeze, trade between the two countries has grown in recent years and reached a new peak in 2013.