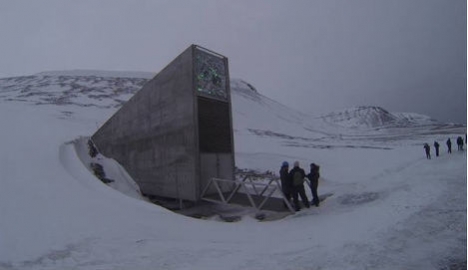 The seeds are delivered the the Svalbard Global Seed Vault on Wednesday. Photo: Global Crop Diversity Trust
“We are entrusted with the genetic wealth from some 128 countries – a resource we cannot afford to lose,” Dr. Mahmoud Solh, director general of the International Center for Agricultural Research in the Dry Areas (Icarda), said in a statement. “Almost all the germaplasm collections are now saved outside Syria."
Aleppo has been left in ruins since seeing some of the fiercest fighting of the Syrian civil war. Roughly half of the city has been in the hands of Syrian rebels since the start of 2013, with government forces holding the other half.
According to Icarda, seven shipments containing a total of 116,484  seeds have now been received by the Global Seed Vault, with the latest shipment arriving in March.
This is no small achievement for the genebank's 12-member team in Syria, who have been working in increasingly challenging conditions to duplicate the seeds, document them, package them, and ship them to locations around the world.
The Aleppo genebank contains arguably the world's largest collection of barley, fava bean and lentil crops, along with ancient varieties of durum and bread wheat, and wild crops collected in the 'fertile crescent', the area of Egypt, Israel, Palestine, Lebanon, Syria and Iraq, which is the site of the earliest recorded crop domestication.
Marie Haga, who leads the global mission in the conservation of crop diversity as Executive Director of the Global Crop Diversity Trust, commended Icarda for its efforts.
"The loss of seed collections at times of conflict is an unfortunate fall-out," she said. "We applaud the work of Icarda’s gene bank staff, who have gone above and beyond their duty to assure the conservation of this global heritage."
Svalbard’s Coordinator Ola Westengen said that the problems faced by the Syrian genebank underlined the rationale for keeping a seed bank in as remote and safe location as Svalbard.
"The current situation for the globally important genebank in Syria precisely illustrates the purpose of the seed vault – to be a safety net for valuable seed collections”, he said