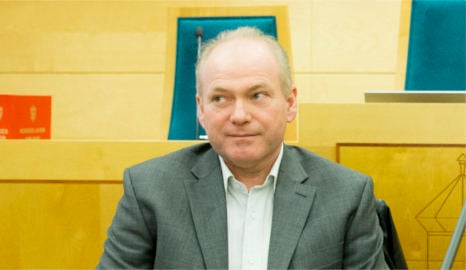 Court psychiatrist Terje Tørrissen ruled the plumber was not psychotic. Photo: Håkon Mosvsvold Larsen / Scanpix NTB
The 42-year-old man and his younger colleague had been working on a job together in the summer of 2012, when the younger man began attacking him about his sexuality, telling him that he had heard rumours that he had a secret male lover.
Later that day, the younger man refused to take an order from the 42-year-old, saying he would not work with "a grumpy little gay".
At this, the 42-year-old flew into a rage, and began battering his younger colleague with a piece of plastic piping. He then drew a knife and began stabbing his colleague in the back and head. By the time, the men's two other colleagues stopped the attack, he had stabbed the younger man ten times.
During the trial, the 42-year-old claimed that he had believed that he was using a ruler, not a knife, during the attack, a claim the court dismissed as unlikely in its judgement.
It ruled, however, that in all probability the man, who had a history of mental illness and medication use, was psychotic at the time.  This went against the opinion of the court psychiatrist, Terje Tørrissen, who argued that the man appeared to have been sane.
Tørrissen was one of the two psychiatrists commissioned to provide a second expert report on far-right terrorist Anders Breivik. Unlike the first two psychiatrists, he and his colleague Agnar Aspaas ruled that Breivik was sane.