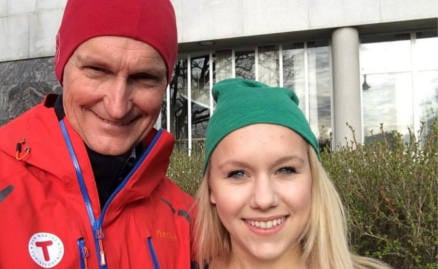 Nils Øverås, secretary general of the Norwegian Trekking Association and Hanna Melhus, head of the organization's youth wing, posing for the April Fools message. Photo: Norwegian Trekking Association
"It started as a joke on our website, but by the incredible Facebook response and the 48,000 hits, we realised out that we had identified an actual need," the organisation's communications director Ida Amelie Helgesen told VG newspaper. "So now we are introducing 'cap-labelling' in the mountains for real".
The announcement on April 1st featured a photograph of Nils Øverås, the association's secretary general, sporting a red hat, and Hanna Melhus, head of the association's youth wing, in green.
"Going on the mountain at Easter?" it read. "Remember to bring your green hat if you're single, red hat if you are taken and orange hat if you might be open for contact."
Helgesen said that the Easter weekend would be the test of whether the new system takes off.
"I think a lot will hang on this Easter," she said. "There are many singles who are interested in dating and in Norway we are a little shy, so it will help to have a hat that signals whether we are interested or not."