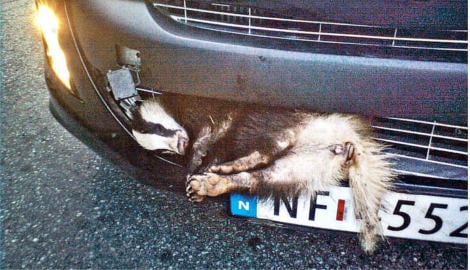 The badger stuck in Borgar Kristensen's car last year. Photo: Borgar Kristensen
"I was very surprised that it was alive," Borgar Kristensen, 50, told The Local on Wednesday. "After four or five minutes, the animal went down the road. It was not badly injured."
Kristensen was travelling at 80km down the E18 highway in southern Norway in the early hours of the morning when he spotted the badger, known as a 'grevling' in Norway, in his headlights.
He couldn't swerve out of the way as there was a car coming down the opposite lane, so he rammed straight into the unfortunate animal.
To his horror, when he stopped in a safe place, he saw that the badger had become firmly wedged into the front grille of his Peugeot car. Together with his three colleagues he then found a stick nearby to prise the animal out. It was only then that he realized that miraculously, it had not been badly hurt.
Kristensen did nothing after the incident, which took place a year ago. He only sent in the pictures to Norway's VG newspaper when he read a story on Monday about a woman who got a small deer stuck in the front grille of her car, also a Peugeot, in Potters Bar, London.
"I had the picture in my mobile phone and I saw this story in the VG newspaper and I sent the picture to them," he told VG. 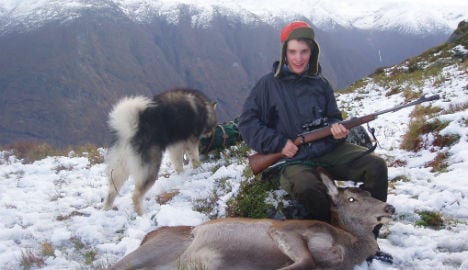 NORWAY
Owners of 70,000 guns in Norway are dead: Police 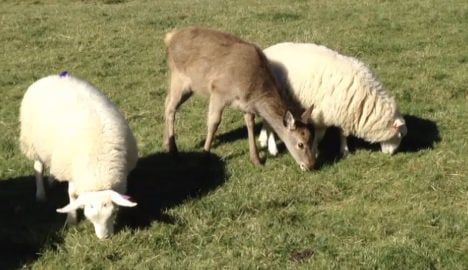 FARMING
VIDEO: Baby deer believes it is a sheep
Url copied to clipboard!