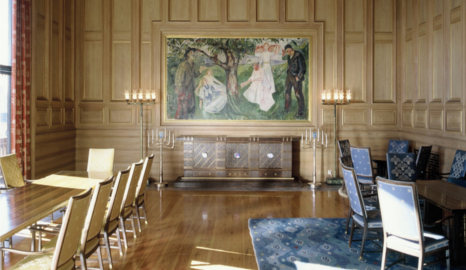 The Munch Room in Oslo City Hall. Photo: Oslo City Hall
The city's mayor, the Conservative party's Fabian Stang, and Deputy Mayor Libe Rieber-Mohn from the Labour party, announced their bipartisan move on Thursday evening.
"We have decided to open the hall for priests who want to bless gays," Rieber-Mohn told VG newspaper. "We think it's sad that the church does not want to open its doors for weddings of people who love each other."
Carl Petter Opsahl, the jazz musician and priest, said he planned to take the Oslo City Council up on its offer.
"I would like to set up in the town hall, definitely," he said. "This gives a helping hand to Oslo priests and gay couples who want to marry in a Christian ritual," he said.
Mayors in Tromsø, Bodø and Sandnes on Thursday said they would do the same.