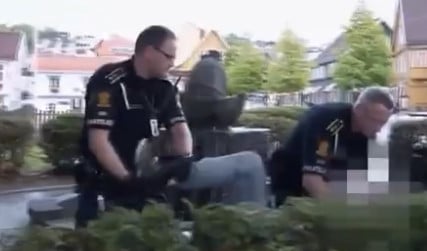 Norway police deal with a combative drunk. Photo: Screen Grab/Live Leak/Nattpatruljen
The footage from Nattpatruljen, a Norwegian police reality show, shows two policeman in Tromsø, northern Norway, good-naturedly picking up a drunk and taking him off to a drunk tank in the local jail.
“I am not intoxicated for fuck's sake," the man shouts. "The fucking police are hunting me down. I get so fucking angry."
To which the police laugh gently, and then apologize for ridiculing him.  "You are a little funny right now," one explains.
"Can I bring my dick with me?" the man then roars.
"Yes if it hangs on," answers the policeman with a chuckle.
"The American version would have ended with 16 gunshots at the 0:03 time mark,"  wrote one of he 70 commentators on the video.
"With a taze at the 0:01 mark," wrote another.
The video had been viewed 144,700 times by Friday morning.