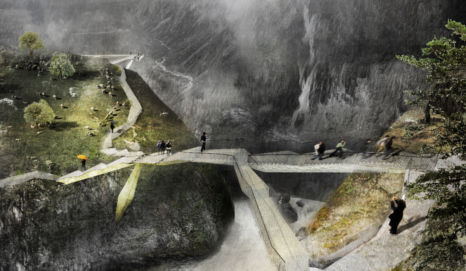 Vøringsfossen Waterfall Area. Photo: Carl-Viggo Hølmebakk
"This will be a world-class attraction, that something I feel confident about," said Anved Johan Tveit, the local mayor campaigning for the project. "I hope that work can begin as early as this autumn."
Tourists already flock to view what in Norway's most famous waterfall, viewing it from either the Fossli Hotel or the Vøringsfoss Kafetera on the other side of the gorge.
But once this striking design by the Norwegian architect Carl-Viggo Hølmebakk is built, they will be able to walk just above the thundering waters, feeling the cold spray drift up over them.
The waterfall has a vertical drop of 145 meters, making it one of Norway's most spectacular natural attractions.
See further images below: