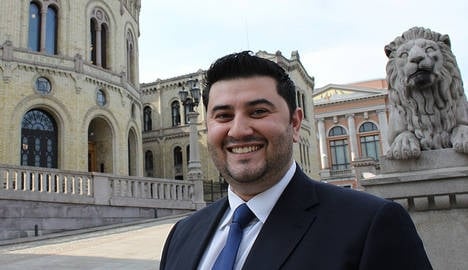 Progress's immigration spokesman Mazyar Keshvari outside the Norwegian parliament. Photo: Progress Party
Mazyar Keshvari, the Progress Party's immigration spokesperson told Norway's NRK channel that his party was opposed to health centres which treated immigrants without legal residence, such as one run in Oslo by the the Church City Mission and the Red Cross.
"Ideally, we would like to make sure that we made no such offer to people who violate Norwegian law and are here illegally," he said. "This will only make the problem escalate, which is to no one's benefit."
He said that Progress aimed to legislate to prevent the Red Cross and others from running such centre, but admitted that he did not know if the proposal had the support of the party's Conservative partners.
The proposal was immediately condemned by the Christian Democrats and Liberal party, which support the government but are not part of the coalition.
This is a worrying proposal from the Progress Party," Liberal Democrat MP Ketil Kjenseth told Dagbladet. "I believe there's no majority support for this in parliament."
Olaug Bollestad, a  Christian Democrat MP who, like Kjenseth, sits on the parliament's health committee, warned that if it was ever enacted, the policy risked causing serious problems, not only for illegal immigrants, but for their neighbours.
"If they do not get health care, those with physical and mental illnesses will become like ticking time bombs which will ultimately become an urgent matter," he said.