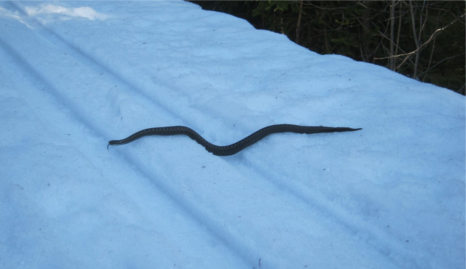 The viper that stopped skiers on Saturday. Photo: Tom Ingebrigtsen
Tom Ingebrigtsen, a journalist for Norway's NRK broadcaster, had never seen anything like it, and immediately snapped this photograph with his phone.
"I was a little bit scared, but then I stopped, took it on my ski pole and threw it three metres away from the cross country skiing track," he told The Local, adding that the snake had "sputtered" angrily when lifted.
He said that he had read other reports of skiers finding snakes on ski tracks over the weekend, when the air temperature was above 10 degrees centigrade.
"I'd never experienced it before," he explained. "It’s unusual, but  not unique, since I have heard of this other man having the same experience on the same day at another place in the Oslo forest.
He said that he believed the the sun must have warmed up the spot where the snake had hibernated through the winter, waking it and causing it to venture out, even though there was still thick snow just three meters away from the spot.
According to one expert cited by NRK, adders are extremely toxic when they first emerge in the spring, because they haven’t used their poison all winter.

The story was first reported on NRK here.