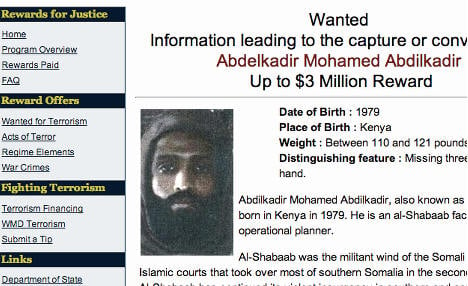 The wanted site for Abdelkadir Mohamed Abdilkadir. Photo: Rewards for Justice
Abdilkadir, also known as Ikrima, lived in Norway as an aylsum seeker from 2004 to 2008 but left the country before he received citizenship.
"He is an al-Shabaab facilitator and operational planner," the US State Department wrote on the page for its Rewards for Justice programme. ¨
The page for the 34-year-old also notes that he is missing three fingers from his left hand.
It said that al-Shabaab was classed as  terrorist operation by the US in 2008, and later announced a formal alliance with al-Qaida in February 2012.
The Rewards for Justice programme, established in 1984, claims to have been responsible for the tracking down and killing of Uday and Qasir Hussein, Saddam Hussein's two sons, as well as ten other wanted terrorists and criminals.