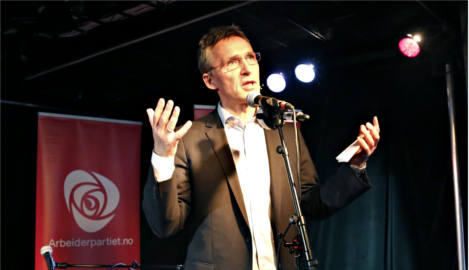 Jens Stoltenberg. Photo: Marte Christensen/NTB Scanpix
According to the paper, the decision will most likely be announced at the start of April — although it didn't rule out US President Barack Obama confirming the appointment as early as Monday, when he comes to The Hague at the start of a trip to Europe.
Stoltenberg, who served as Norway's Prime Minister from 2005 until 2013, won the respect of the world with his speech following Norway's horrific terror attacks of July 2011, which set the tone for Norway's dignified response with a call for "Even more democracy. Even more humanity. But never naivety."
Stoltenberg will be replacing former Danish Prime Minister Anders Fogh Rasmussen, who steps down on September 30th, and who has held the role since August 2009.
Aftenposten said British Prime Minister David Cameron and French President Francois Hollande both recently threw their support behind Stoltenberg, who was first proposed as a candidate by German Chancellor Angela Merkel shortly after his centre-right coalition was voted out of government last September.
According to the paper, Stoltenberg held in-depth discussions in Washington with US Secretary of State John Kerry for several months over the winter.
Other names in the running have reportedly included Franco Frattini, a former Italian Foreign Minister, Polish Foreign Minister, Radoslaw Sikorski, and Manual Barroso, the head of the European Commission.
Stoltenberg would be Norway's first ever Nato Secretary General,  and is the third Norwegian candidate to be in the running, following Kåre Willoch, who came close in 1988, and Defence Minister Kristin Krohn Devold in 2004.
Last Wednesday Norway's Labour Party briefed its MPs on  Stoltenberg's negotiations over the position. If he retires as party leader, the party will convene an extraordinary national congress, with Jonas Gahr Støre favorite to take over from Stoltenberg.