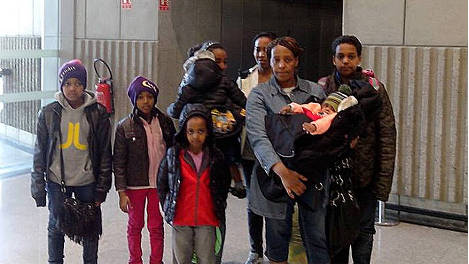 Simreth Wolbgeber and her eight children in Paris Charles de Gaulle. Photo: Simreth Wolbgeber
Norway's immigration services deported Simreth Wolbgeber and her family on March 12 to France, the European country responsible for processing their asylum claim under European Union rules. The family arrived in France early last year, after fleeing the repressive government in Eritrea, and it was there that they were first fingerprinted and registered as asylum seekers.
The French authorities claim to be unable to find temporary accommodation for such a large family, and as a result have left Wolbgeber and her children stranded, sleeping on uncomfortable plastic seats in the airport lounge and depending on charity from the Red Cross as they wait for a place.
"To sit for so many days at an airport with eight children is inhuman. It is outrageous," Ranveig Kaldhol, a church social worker in Ulsteinvik,  where Wolbgeber had been living, told The Local.
"It's terrible," Kaldhol added. "They are innocent children and they haven't had one decent meal. They have been living on drinks, cup cakes and yoghurt given to them by the Red Cross, and they haven't had beds, or even a shower. The youngest is only five months old."
She argued that when children are involved the Norwegian authorities had a duty to liaise with a receiving country's immigration agencies.
"The Norwegian government, before they send children, they should know that there is someone to take care of them to give them at least the minimal protection," she said. "They haven't done anything criminal, they have just asked for protection from Eritrea. That's their sin."
Geir Bang Danielsen, the deputy director of Norway's immigration police, told NRK that the responsibility for the family now lay with France's authorities.
"France is responsible for the family according to their duties under the Dublin cooperation," he said.  "The aim is to ensure that an asylum seeker get his application processed, but at the same time to ensure that no one travels from country to country and applies for asylum in several Schengen countries."
Here is a picture a friend of Simreth Wolbgeber's took of her in the airport:

Here are her children trying to sleep: