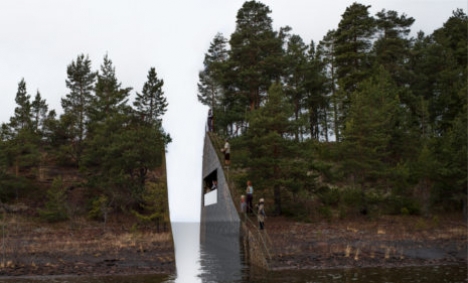 Memory Wound by Jonas Dahlberg -- Source: Jonas Dahlberg
"Memory wound", proposed by Swedish artist Jonas Dahlberg, won the design competition for the memorial at the end of last month, winning over the judges with its bold idea of cutting a three-and-a-half-metre slice through the Sørbråten peninsular which juts out towards Utøya.
In the arresting conceptual images Dahlberg submitted, the exposed surfaces of the slice are polished to a marble-like sheen, the names of the dead carved on the far side.
But the geologist Hans Erik Foss Amundsen believes that the soft sandstone rock out of which Sørbråten is made will make it impossible for Dahlberg to realise his idea.
"To create this monument would be like cutting through a mound of soft gravel," he told The Local. "The monument might crumble immediately."
Images of "Memory wound" were reproduced in newspapers and websites across the world, with the bold idea of creating a "permanent scar" on the landscape generally commended internationally.
But locals living near Utøya last month launched a campaign to block the memorial, attacking it as a "rape of the landscape", while the parents of one of the dead said they did not want their daughter's name on the memorial and had never been asked about it.
Jørn Mortensen, head of the art selection committee, said that Dahlberg and Koro were aware of the geological challenges.
"The artist Jonas Dahlberg submitted as part of his proposal a solid analysis of the geological conditions," he told The Local.  "The porous condition of the rocks is therefore of no surprise. As a consequence Dahlberg proposed alternative surfaces for the cut, and suggested also the expenses of this in his budget."
Mortensen conceded that apart from the landowner, locals had not been consulted on the design, but stressed that he had held meetings with both the official support group for bereaved families and the Labour Party youth organisation, and that both of these organisations had had representatives on the jury.
"I did expect reactions," he said. "In general because that is normal with public commissions and specifically because the design is brave and responds to the radical violence that took place on Utoya in a very concrete symbolic and aesthetic way."
Amundsen said he could not see how the problem posed by the geology could be overcome without enormous cost.
"It's extremely difficult to make what they want to make," he told The Local. "Once you manage to make a flat surface, you can attempt to impregnate this entire hillside with some kind of epoxy, seal it off and harden it, but if you don't manage to seal off all of the fractures it will freeze in winter, expand and crumble.  They risk having to remake it every spring."
He said that he had realised the issue as soon as he'd seen the designs.
"I reacted when I saw the first artistic drawings in an internet article, and knowing a bit about the geology, I thought this was not possible," he said. "The entire society of geologists are rolling their eyes. You don't have to have a PHD in geology to know that this won't work."
"What's remarkable is that they've chosen the concept without any understanding of the geology. It's extremely poor homework to put it mildly."
Dahlberg plans to begin excavating the site before the summer, and the aim is for the memorial to be completed by 22 July 2015.
The far-right extremist Anders Breivik unleashed a gun massacre at a Labour party youth camp on the island on 22 July 2011, leading to the deaths of 69 people, most from gun wounds and the rest from drowning as they tried to escape the killer.  A further eight people were killed in a bomb Breivik detonated at the government quarters in Oslo.