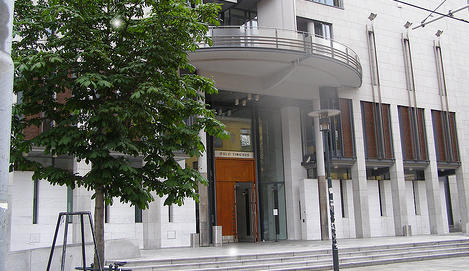 Oslo District Court. Photo: Sean Hayford O'Leary/Flickr
The woman's British lover, accused of giving instructions for the murder via an online video service, also pleaded his innocence in Oslo District Court.
Yasmin Chaudhry, 28, and Ammaz Omer Qureshi, 35, are accused of drowning the woman's daughter from another relationship by plunging her head into a bucket of water in October 2010.
The murder took place, according to investigators, after the toddler interrupted the couple during an online video chat via MSN in the early hours of the morning.
The man, who was in London at the time, allegedly told the woman to "discipline" the child and issued instructions which led to Chaudhry plunging the child's head under water until she lost consciousness.
Chaudry then called emergency services and reported the incident as an accident. The child died in hospital the following day.
On Monday she pleaded not guilty to first degree murder but admitted to assaulting the child. She said her lover had told her that if the child was not disciplined she would develop loose Western habits.
"I had to command respect from her. If not, she would turn into a typical Norwegian woman, just asking to be raped," the woman told the court.
Her lover denied any involvement in the crime.
In addition to the murder, the duo are accused of "regularly" torturing the girl over a six-month period — the mother allegedly received online instructions from Qureshi who also witnessed some of the abuse via the Internet.
During the assault the child was forced to swallow a spoon of chilli powder, was gagged with adhesive tape, given cold showers and was slapped around the face.
If found guilty of murder the couple face a 21-year jail sentence. Child abuse carries a six-year sentence.