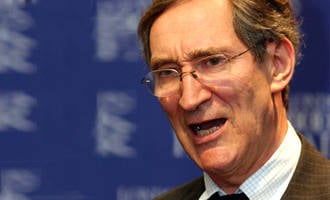 Christopher MacLehose. Photo: London Book Fair
Christopher MacLehose, who MacLehose Press translated and published Larsson's Millennium Trilogy in 2008, made his call in an interview with Norway's NRK television channel at the Oslo Crime Writing Festival.
"Scandinavian crime is a genre that has taken the world by storm over the past ten years. It will not be as dominant in the future," He said.
"I have a feeling that a huge amount of Scandinavian crime has been published and translated over  last five years, just because of the status and attention the brand of Scandinavian crime has had," MacLehose argued.
"Some of the books published are certainly not as original and interesting as books by Arnaldur Indriðason, Karin Fossum, Henning Mankell or Stieg Larsson."
MacLehose predicts that the next wave of crime fiction in translation will come from France and Italy, where the plots tend to be less bleak and violent.