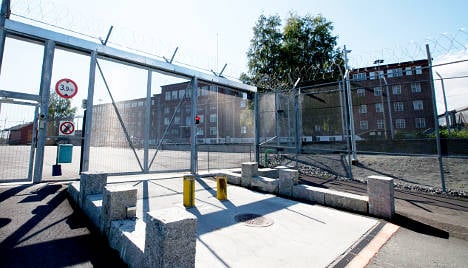 Ila Prison, one of the two prisons where Anders Behring Breivik complains he is being tortured - Photo: Holm Morten/Scanpix
The right-wing extremist — who killed 77 people in a bombing and shooting rampage on July 22, 2011 —  filed a formal complaint in January 2013 against Norway's minister of justice and the director of Ila prison near Oslo where is serving out a 21-year sentence. He has repeatedly warned that he may go on a hunger strike over the issue.
In the complaint, Breivik lamented the lack of activities on offer, countless body searches and an "almost total" ban on expressing himself – all of which, according to his lawyer, violate Norway's law that prohibits acts of "aggravated torture".
"The complaint has been examined in the light of current regulations," police commissioner Indrig Wirum told AFP. "On this basis we have concluded that neither the prison in Ila nor the
people mentioned in the complaint are guilty of any wrongdoing."
Breivik's lawyer told AFP that his client "was not surprised".
"He noted that the case has been closed despite significant documentation which demonstrates the violation of European prison regulations and human rights," said lawyer Tord Jordet.
"It does not seem that the police wanted to investigate thoroughly," he added.
Since being incarcerated and regularly moved for security reasons between two prisons — Ila near Oslo and Skien high security prison in southeast Norway — the convicted murderer has complained regularly about his living conditions.
On a list of 12 specific demands mailed to prison authorities he asked for an upgrade of his Playstaton 2 games console to a more modern PS3 version and the replacement of a "painful" desk chair with a more comfortable armchair.
On July 22, 2011, Breivik killed eight people in a bomb attack outside a government building in the capital Oslo and later murdered a further 69, most of them teenagers, when he opened fire at a Labour Youth camp on the island of Utøya.