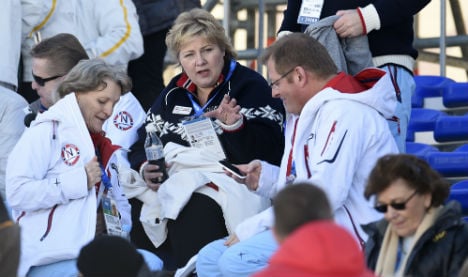 "It's a great day for Norway. I'm sure the Norwegian people have had a very happy morning!" beamed Solberg.

The premier watched on as Jansrud claimed victory with a high bib number of 21 in bright, warm conditions at Rosa Khutor, where the stands had a large Norwegian contingent.

Jansrud's teammate and one of the race's big favourites Aksel Lund Svindal, however, could only finish seventh.

"It would of course have been great if we had two on the podium, but I think we should be grateful for the one we have won, that's the gold medal. Jansrud's done a tremendous job throughout the Olympic Games," Solberg said.

"He (Jansrud) is absolutely an idol for young Norwegians."

Solberg said Norway's strong alpine skiing tradition, kickstarted by now-retired legends Kjetil Andre Aamodt and Lasse Kjus, was formed on the bedrock of the Winter Games the city of Lillehammer hosted in 1994.

"It started up in the mid-1990s with a very good group of youth that's started to be very good. They've been idols for a lot of young Norwegians," she said.

"Then of course after the Olympic Games in Lillehammer we had better downhill areas, so I think it's a good training opportunity also."

Solberg insisted Norway were going to go for more gold as the Games enter their final week.

"We have more expectations," she said. "There are more cross-countrys, more alpine, we'll at least give a good fight for it."