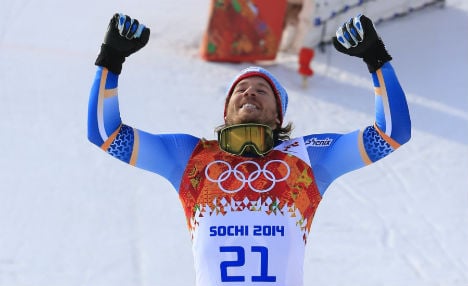 The 28-year-old Norwegian, who won downhill bronze exactly a week ago, mastered the challenging course in a time of 1min 18.14sec.

Canada's Jan Hudec was a surprise joint third with Miller at 0.53sec.

Miller, who has now won six Olympic medals, long looked the likely winner. The US skier had been desperately chasing a medal after finishing eighth in the downhill and sixth in the super-combined at the Sochi Games.

On Sunday, he took every risk on the course, leading after the first intermediate time and keeping that pace right to the finish.

But Jansrud left no doubt gold belonged to him with a dominant performance that put him fully half a second ahead of the US star.

Hudec and Weibrecht — who has not had any major podiums since Vancouver — then slotted in for a shock podium with two bronze medallists after a dead
heat.

"I made mistakes and the snow is really difficult. It just peels away from you. I tried to build pressure on the first couple of turns but it's really steep up there," Miller said after his run.

"Coming off the first pitch I thought I was in good shape but the snow is so soft."

Sunday's race, held in glorious sunshine but on a rapidly deteriorating course due to warm temperatures, proved ruthless for several favourites, who skied out or performed below expectations.

The three-time Olympic medallist and World Cup super-G leader was the biggest favourite going into the race.

His disappointing result on Sunday adds to a fourth place in the downhill — where he was pushed off the podium by his countryman Jansrud — and eighth place in the super-combined.

"I had four bad turns at the top, and this is where I left all the time. (This) place is not where I want to be, but that's just the way it is."

He paid tribute however to his compatriot: "To see him pull out his stuff today was really impressive."

Italy's Christof Innerhofer, 2011 super-G world champion and already a double medallist in Sochi with downhill silver and super-combined bronze, barely spent any time on the course, sliding out early in a deeply rutted
turn.

"I thought I could make up a lot of time in that turn at the top, but my plan backfired because it's steep and slippery," he said.

Two young Austrians did unexpectedly well: 22-year-old Otmar Striedinger, who took his first World Cup podium this season in Beaver Creek, finished just two hundredths of a second off the podium, with teammate Max Franz a further five hundredths behind.

Norwegian Prime Minister Erna Solberg was on hand Sunday to watch the race in the mountains above Sochi.

"It's a great day for Norway," she said.

"It would of course have been great if we had two on the podium, but I think we should be grateful for the one we have won, that's the gold medal," she added, describing Jansrud as an "idol" for young Norwegians.

The race had been moved forward by one hour to 10:00 am due to warm temperatures, while many skiers complained of slushy conditions on the course.

In the end however, all the medallists except for Miller had a bib number above 20, meaning they started later in less favourable conditions.