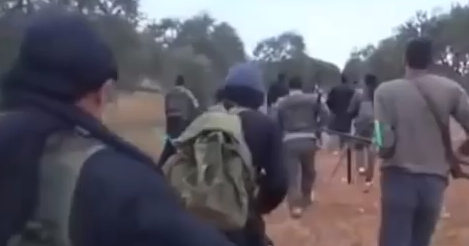 A Jabhat al Nusra detachment in Syria - Source: YouTube screengrab
The man, who is of Pakistani origin, was arrested by officers from the Norwegian Police Security Service (PST) when he returned to Oslo on Friday night and is  now being treated in an Oslo hospital for wounds sustained in the fighting in Syria.
"I can confirm that we have charged a person who has returned to Norway after having been in Syria," PST chief Martin Bernsen told Dagbladet.
According to the newspaper, PST have charged him for "participating in a terrorist organization that has taken steps to realize its aims by illegal means".
The man, who is from Oslo, is thought to have fought in Syria in brigades run by the extreme Islamist organizations Jabath al Nusret and ISIL (Islamic State of Iraq and the Levant), both of which are included on the United Nations list of terrorist organizations.
He has been charged for participating in military actions, murder and other serious acts of violence against Syrian government forces and other people or groups Jabath al Nusret and ISIL considered to be infidels.
The man's defence lawyer John Christian Elden said, under the criteria PST was applying, all of the Norwegians who went to fight in the Spanish Civil War in the 1930s would have been branded terrorists.
"Our client is unable to understand the charges and denied culpability," Elden said. "Had they used the same criteria earlier, all of the volunteers who went to Spain in the 30s would have been labeled terrorists."
He pointed out that both the US and Norwegian governments were also actively supporting the rebels.
"I note that the PST believes Syria's government is the aggrieved party," he said. "That means that the PST also considers the US and Norwegian governments as terrorists. Both the Americans and the Norwegian government are fighting against the Syrian regime."
The man was seriously injured after taking a bullet in the leg, forcing him to return home.  PST believes around 40 Norwegian have travelled to fight in Syria, of which several have returned.