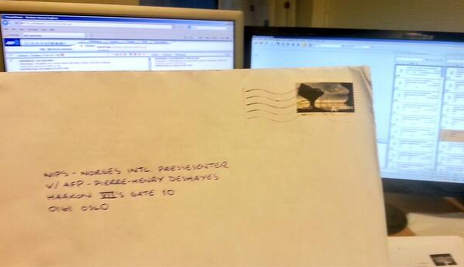 The letter received by AFP: Source: Twitter/ Pierre-Henry Deshayes
Norwegian mass murderer Anders Breivik has threatened to go on hunger strike for better video games and other perks to alleviate his "torture"-like prison conditions, in a letter received by AFP Friday.
The right-wing extremist — who killed 77 people in a bombing and shooting rampage on July 22, 2011 — enclosed a typed list of 12 demands sent to prison authorities in November.
He described as "torture" the conditions in two prisons — Ila near Oslo and Skien in southeast Norway — where he is serving out a 21-year sentence.
The demands include better conditions for his daily walk and the right to communicate more freely with the outside world, which he argues are in line with European rights legislation.
He also demanded the replacement of a PlayStation 2 games console for a more recent PS3 "with access to more adult games that I get to choose myself" as well as a sofa or armchair instead of a "painful" chair.
"Other inmates have access to adult games while I only have the right to play less interesting kids games. One example is "Rayman Revolution", a game aimed at three year olds," wrote the 35-year-old convicted killer.
Held apart from other prisoners since 2011 for security reasons, Breivik wrote that he has behaved in an "exemplary fashion" in prison, arguing that he has the right to a wider "selection of activities" than other inmates to compensate for his strict isolation.
Breivik also wants his standard weekly allowance of 300 kroner ($49) to be doubled, particularly to cover his postal charges for written correspondence.
His mail is monitored and censored by prison authorities which, he complained, considerably restricts and slows down his contact with the outside world.
Other demands include an end to daily physical searches at Ila prison, and access to a PC rather than to a "worthless typewriter with technology dating back to 1873".
"You've put me in hell … and I won't manage to survive that long. You are killing me," he wrote to prison authorities in November, threatening a hunger strike and further right-wing extremist violence.
"If I die, all of Europe's right-wing extremists will know exactly who it was that tortured me to death … That could have consequences for certain individuals in the short term but also when Norway is once again ruled by a fascist regime in 13 to 40 years from now," he warned, calling himself a "political prisoner".
On July 22, 2011, Breivik killed eight people in a bomb attack outside a government building in the capital Oslo and later killed a further 69, most of them teenagers, when he opened fire at a Labour Youth camp on the island of Utøya.
In the letter dated January 29 he said that since there has not been any real improvement in his prison conditions, a hunger strike would be "one of the only" options at his disposal.
"The hunger strike won't end until the Minister of Justice (Anders) Anundsen and the head of the KDI (the Norwegian Correctional Services) stop treating me worse than an animal," he said, adding that he would "soon" make public the starting date of his protest action.
Karl Hillesland, acting director of the prison where is being held, told AFP that no one is currently on hunger strike there.
In his letter Breivik attacks the Scandinvaian media which he accuses of complicity with the "torture" he is subjected to by not reporting his complaints.
He also refers to himself as a "human rights activist":
"You seem to think that we — all human rights activists who fight for one fundamental human rightsght (cultural self-determination) — … are Nazi monsters who should be pushed into suicide," he wrote.
Breivik's lawyers announced in January 2013 that their client had lodged a complaint over alleged "aggravated torture".
"These conditions have barely improved since," his lawyer Tord Jordet said Thursday, adding that he was nonetheless "keeping his spirits up."
Norwegian police told AFP that a response to that year-old complaint is due next week.