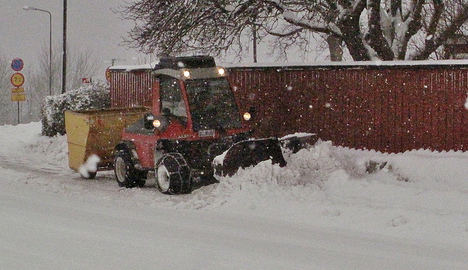 This is not the snowplough featured in the story. Photo: Per Egevad/Flickr
The children had travelled around ten kilometres (six miles) towards their grandmother's house when a snowplough driver saw the automatic car stuck in a ditch on a quiet country road in south-eastern Norway, according to the police, who were informed at around 6am.
"This seems to have happened on an impulse. He woke up at night, his sister was also awake and he decided to take her for a ride," said Kai Lyshaugen, a local police officer in the southern region of Vestoppland.
According to the Norwegian daily Dagbladet, the boy told the snowplough driver that they were on their way to their grandmother's house about 30 kilometres away.
He later told another snowplough operator that he was a dwarf and had wound up in the ditch when making a hasty U-turn to go home for his driving licence.
The young boy and his 18-month-old sister, who was sitting on the passenger seat without a seat belt, were unharmed and cheerful when they were found.
"He asked for help to tow his vehicle so they could continue their journey," Lyshaugen said.
Police returned the children safely to their parents.