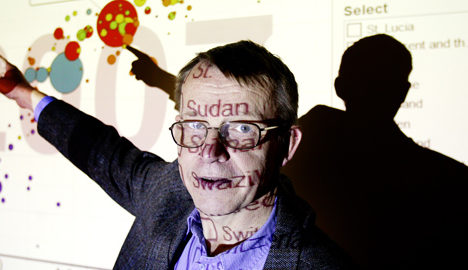 Hans Rosling, Professor of International Health at Sweden's Karolinska Institute. Photo: Stefan Nilsson
Norwegians sniggering about would-be US ambassador George Tsunis' apparent lack of knowledge about Norway now have reason to pause.
According to the 2013 Ignorance Survey released last week fewer Norwegians got the answer right than American respondents on as many as eight of the ten questions asked.
In a typical example, when asked about the life expectancy of the world as a whole, only 14 percent of Norwegians ticked 70 — the right answer — compared to 53 percent of Americans.
When asked what proportion of one-year-olds in the world are vaccinated against measles, 17 percent of Americans ticked 80 percent, the right answer, compared to just 10 percent of Norwegians.
The Ignorance Project,  launched last year by Rosling's Gapminder Foundation, aims to "promote a fact-based world view" by challenging people's misconceptions about world development, asking questions about basic global patterns and macro-trends, such as world population, poverty and birth rates.
It may come as some comfort to Norwegians that, according to Rosling, the comparatively better performance of American respondents doesn't mean they are better educated: quite the opposite in fact.
"They never came to over 33 percent correct answers, so it just means they came closer to random," he told The Local.
"Because chimpanzees get 33 percent right answers. The most probable reason is that Americans have fewer of those preconceived ideas, so they guess. I think the strength of the pre-conceived ideas is stronger in Scandinavia than in America."
In the 2007 lecture that made Rosling's name,  he pointed out that chimpanzees also statistically did much better on his 'world test' than his students at the prestigious Karolinska Institute in Stockholm, where he still has the post of Professor of International Health.
"The problem for me was not ignorance," he told the audience in his famous TED talk. "It was preconceived ideas."
He said that people in Norway were not kept up to date by the media on changes in global trends, pointing to the deceleration in population growth over the last few decades as the most telling example.
According to the survey, there will be two billion children in 2100, a number only seven percent of Americans,  six percent of Norwegians and eleven percent of Swedes got correct.
"The number of children has stopped increasing in the world," he said. "I call that the biggest event in human history that was completely missed by the media. And the reason is that it’s so slow."

"People are never told about the progress. Decade after decade, they think it is as it was long ago. The world view that emerges corresponds quite well to the world 30-40 years ago. They have a time lag of 30-40 years."

"Look at vaccination," he continued. "The number of children vaccinated, people think it’s between 20–25 percent who are vaccinated, but it’s 84 percent."

Sweden did similarly worse than the US, but slightly better than Norway, with more Swedes getting the answer right than Norwegian respondents on five out of the ten questions, Norwegians beating the Swedes on four, and the two drawing on one.