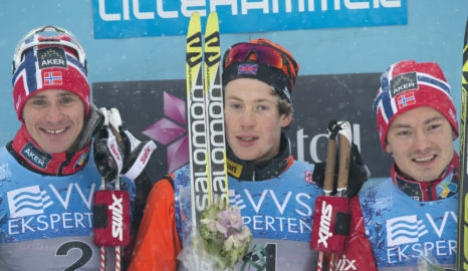 Andrew Musgrave (centre) after his win at the cross-country championships in Lillehammer. Photo: Terje Bendiksby / NTB Scanpix
"I don't think the Norwegian press could believe it; this British guy coming along and beating all their hopefuls," Andrew Musgrave told TeamGB, a news site run by the British Olympics Federation.
"Perhaps they now realise we Brits are not just a bunch of idiots with two planks on our feet trying to waddle around."
Musgrave, who studies in Norway and speaks fluent Norwegian, said he had enjoyed knocking Norwegian skiers over the months since his surprise victory.
"I poked some fun at them afterwards to make the most of it," he said. "The national championships are a really big deal over there."
Norwegians had generally "said some really nice things" since his victory he added, comparing him to the country's cross-country skiing legend Petter Northug.
"The comparison to Northug, that means a lot to me," he said. "He was famed for being a hard trainer and when I train I try to do it better than anyone else in the world. I like training – some people don't – and I like pushing myself harder than anyone else."
Before he gets a chance to race in the sprint final, Musgrove must first win a place among the 30 athletes chosen after the qualifying race, and then succeed in the semi-finals.
"I've always had a lot of self-confidence and I should be able to qualify for the semi-finals in the sprint," he said. "Once you reach that stage anything can happen. It's a long hard course, people get tired, there are falls, perhaps it goes my way and then I'm in the final."
Musgrave started skiing near his parents' home near Aberdeen, Scotland but moved to Norway after finishing school to focus on his passion.
"I'm so glad I took that chance; it's been an awesome experience for me," he said.