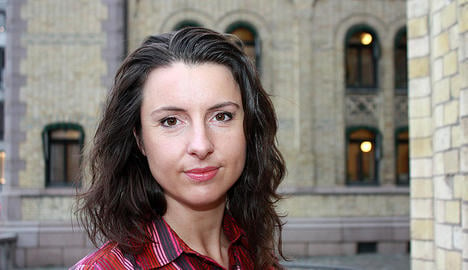 Jenny Klinge - Photo: Labour Party
Jenny Klinge, the party's justice spo complained about the stark difference in penalties under law for those who injure children through female genital mutilation and those who injure them through circumcision.
"It can not be such that when a boy dies, then it’s not punished at all, while if a girl dies it’s punishable by up to 10 years,”  Klinge said in parliament, according to NRK.
She called again for a ban, but said that failing that significant penalties should be put in place for those who injure children during the operation.
“But if the government doesn’t have enough guts to forbid it, and would rather regulate the practice, then they must go into the legislation and criminal law to find out how they can give the same legal protection to boys in the event of injury or death,” Klinge said.
Bent Høie, Norway's health minister, has put a draft circumcision law out for consultation and hopes to have it ready for a parliamentary vote by spring.  Jewish and Muslim groups have been assured that the law will only regulate circumcision and will not interfere with their ritual practices.
Ervin Kohn, the leader of Oslo's Jewish community said it was wrong for Klinge to compare male and female circumcision.
"These are two completely different things. She tries here to argue against the circumcision of male children by comparing it with something it is not, and it is unethical," he said.
Female genital mutilation has been banned in Norway since 1995, while the circumcision of boys is legal.
Jenny Klinge first called for a ban on ritual male circumcision in 2012, when her party was a junior partner in the ruling coalition.