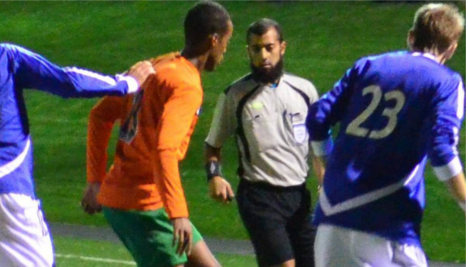 Arslan Ubaydullah Maroof Hussain (centre) working as a referee before he resigned under pressure in 2012 - Photo: Facebook
Arslan Ubaydullah Maroof Hussain, who founded the Prophet's Ummah, an Islamist group, applied to work as a referee for the 2014 season, but was rejected on Tuesday on the grounds that his extremist views would prevent him carrying out the task properly.
The Norwegian football association (NFF) said in a statement on Tuesday that Hussain's public statements "quite evidently break with the norms of conduct which Norwegian football demands of a referee."
It cited in particular his views on the participation of women in football, homosexuality, and the Norwegian armed forces.
“[These] statements are in violation of Norwegian football's views on both gender and equal participation in sport, and [mean] that players cannot possess the necessary confidence in his impartiality,” the
According to Norway's state broadcaster NRK, Hussain is considering taking the NFF to court to force it to let him participate.
"I believe I haven’t violated any guidelines [for Norwegian football], nor am I convicted under Norwegian law,” he said.
His supporters have also launched a Facebook campaign page, titled, "We believe that it is wrong to deprive Ubaydullah Hussain of a football referee licence" .