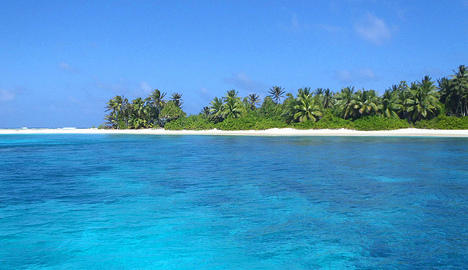 A view of one of the Marshall Islands - Photo: Erin Magee, AusAID
Ola Fjeldstad, a Norwegian anthropology student doing research on Ebon, one of the Marshall Islands, said that the man, who has long hair and a tangled beard, spoke only Spanish and called himself Jose Ivan.
He was found by two locals after his battered fibreglass boat washed up onto the reef surrounding the island.
"His condition isn't good, but he's getting better,"  Fjeldstad told AFP.
The man, who had nothing on but ragged, bleached underpants, said he and his friend had left his home in Mexico on a journey to nearby El Salvador in September 2012.
"The boat is really scratched up and looks like it has been in the water for a long time,"  Fjeldstad told AFP.
Fjeldstad told AFP that he believed the man must have survived by catching fish and turtles with his bare hands, as there was no fishing tackle on the boat.
According to Fjeldstad, the locals took Ivan to the nearest island with a phone line, from where they called the Ministry of Foreign Affairs in Majuro, the Marshall Islands' capital.
The man is likely to be trapped on the island until next week, as the only plane in the Marshall Islands capable of landing there is currently being serviced and will not be available until Tuesday.