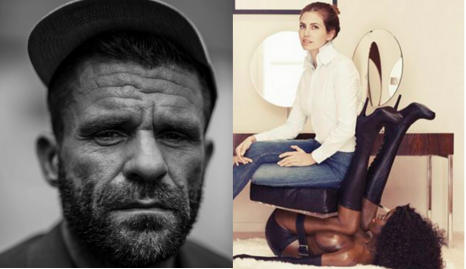 Bjarne Melgaard and the offending picture of Dasha Zhukova sitting on his 'racist chair'. Photo: Screen grab from Buro 24/7 website
"I am not a racist," Bjarne Melgaard told Norway's NRK broadcaster in his home city of New York. "People can interpret things however they themselves desire. It's not something I can decide on."
He expressed bemusement that there had been no reaction when the chair, which is fashioned from a mannequin of a black woman bound up with bondage equipment, was featured in exhibitions in Rome, Paris and New York one and a half years ago.
"I think the reaction is coming a little too late," Melgaard said. "It should have come one and half years ago when the work was exhibited."
The chair caused a scandal in the art world after Dasha Zhukova, a prominent art expert and the girlfriend of oil billionaire Roman Abramovich, was photographed sitting on it on a Russian fashion website.