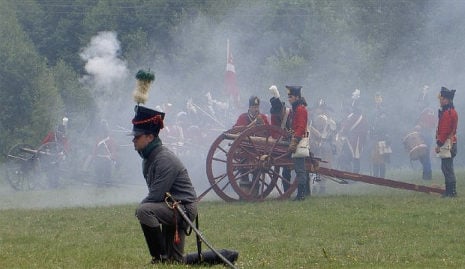 Esten Grafsrønningen (kneeling at the front) in a 2006 re-enaction. Photo: Westgiota Gustavianer
The Norwegian Napoleonic Alliance, a group of history re-enactors from Norway, are going head to head with some like-minded Swedes to recreate two battles, the siege of Fredriksten and the Battle of Lier.
"I have a battle plan," Esten Grafsrønningen, who is leading the Lier re-enactment, told The Local. "The Swedish Jägers are going to attack our artillery units, and then the Swedish infantry are going to attack the Norwegian infantry, and try to push the Norwegians out, and them Norwegian side are going to attack the Swedish side and push them back to Sweden again."
He said he expected the re-enactment, which is scheduled for the first week of August to take about one hour.  The second battle, a re-enaction of the siege of Fredriksten, will take place on August 16th.
"Hopefully it's going to be great," Grafsrønningen said. "We're doing this for the public and for the re-enactors, and hopefully both of them will have a good time."
This year also marks the bicentenary of the signing of the first Norwegian constitution — a direct consequence of the short war between the two countries — which saw Norway and Sweden becoming a united kingdom  for the rest of the 19th century.