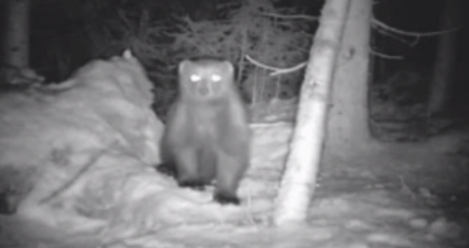 The wolverine caught on Rovdata's cameras. Photo: Rovdata
The wolverine caused some excitement when it was caught last winter on one of the network of wildlife cameras set up by the Norwegian animal monitoring agency Rovdata, as it is highly unusual for one of the animals, a bear-like carnivore of the weasel family, to be spotted so far south.
But now DNA data collected from samples of hair and dung collected last winter, have shown that the exact same animal was also present at a site in Hedmark county and Sweden.
"It isn't an area where wolverines have been documented before," Martin Kjørstad from Rovdata told The Local. "We are also sampling hair and dung this winter. If we're lucky we will find this individual again, and then we can see if she is still in Hedmark county or not."
He said that this was one of the longest female wolverine journeys that has been documented in Norway. Males tend to make longer trips, with one wolverine once shown to have made his way 800km south from Kiruna in Sweden to Hedmark.