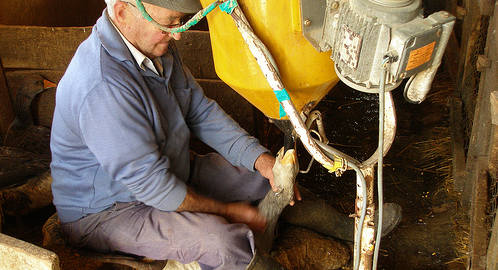 A french farmer during the "gavage" - Source: Jérôme S/Flickr
Meny, Ultra, Centra, Jacobs and CC Food have all stopped stocking the food, which is made by force-feeding geese to create an unusually large and fatty liver.
Meny is now stopping the sale of foie gras and recalling all the products already in our stores," Meny wrote on its Facebook page to explain the decision.  "We have decided that we will not sell products where animal welfare is not addressed, even if the sale is permitted under Norwegian law."
Karen Frivik, a press spokesperson for Norway's Animal Protection Alliance told NRK that the ban was a "victory for the animals and for the long-term work that the Animal Protection Alliance has put into this issue" .
The organization is now lobbying the the Norwegian authorities to introduce a total import ban on foie gras.
The force-feeding method used to make the food, known in France as "gavage", has long been condemned by animal rights campaigners for the suffering it causes the animals. Although the practice is banned in Norway, it is still lawful to import the resulting livers.
France accounts for nearly 80 percent of the total foie gras production, producing about 22,000 tons a year.