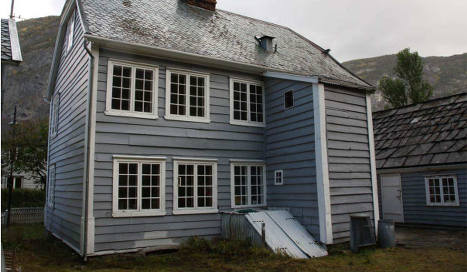 Synneva Eris House - Photo: Stig Nordrumshaugen for Sogn og Fjordane Municipality
Synneva Eris House, a double-story wooden villa dating from 1840, had served as a telegraph station, a bakery and a café over its long life, and was seen as a village landmark.
"The building is special because it is built in the Empire style, which was common in Bergen architecture mid 1800s," Eva Moberg, the head curator for Sogn og Fjordane county told NRK.
The house's builder, master craftsman Andreas Bondehagen, modelled the house on the architecture in his home town of Bergen, she said.
Fortunately the fire on the weekend did not reach the centre of Lærdalsøyri conservation area, which is treasured for its density of old wooden houses.
"Part of me and my family history is gone," Leif Thomas Faulkner, 18, who planned to restore the house after inheriting it from his father, told VG. "It's incredibly sad."
At least 23 buildings were destroyed and about 50 people hospitalized in the fire which broke out on Saturday night.