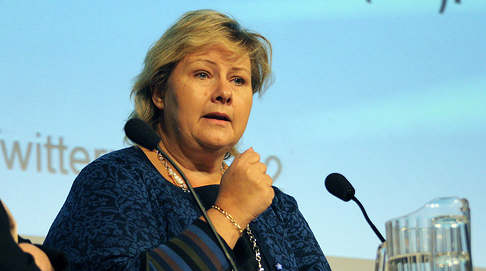 Erna Solberg. Photo: Trondheim Havn
"I don't believe that Great Britain, with its old empire mind-set should consider becoming a member of an organization which basically means that laws and rules which are made in other countries are implemented directly," she told NTB newswires as she left on Wednesday. "I do not think that's a realistic thing right now."
The Wednesday visit is Solberg's first to the UK since becoming Prime Minister last year.
As well as the European Union, energy policy is also likely to be high on the agenda. Norway supplies about a quarter of the UK's gas and the country's state power company Statnett wants to build an undersea cable to the UK.
The two also plan to discuss the case of Joshua French, a former soldier with joint British and Norwegian nationality, who is presently standing trial in the Democratic Republic of Congo, accused of murdering his cellmate.
Norway's people voted against joining the European Union when the country held a referendum in 1994, and it is instead a member of the EEA, giving it access to the single European market in return for adopting many of the regulations made in Brussels.
Solberg warned that many in the UK underestimated how little power Norway has to decide on the laws which apply to it.
"I think those in the British debate who look at Norway's association underestimate how closely connected we actually are with many of the laws and rules they are annoyed with, Solberg told the newswire.
She said she believed it was in Norway's interests for the UK to remain in the EU, where it could act as a break on those pushing for closer integration.
"We are better served if there are countries in the EU who are concerned that should not be a fast train… but instead want to ensure that the cooperation we already have today works better."
The Conservative party leading Britain's coalition government has pledged to hold a referendum on EU membership if it wins an election held in 2015.