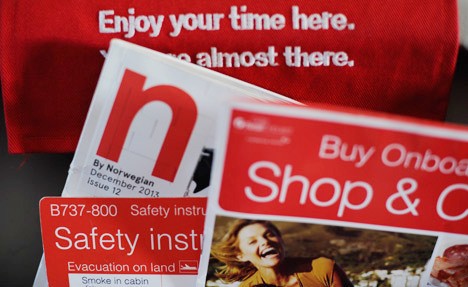 Norwegian cabin literature. File photo: Ann Törnkvist/The Local
Days before Christmas, Norwegian announced that 52 cabin crew in Sweden would be let go. They would continue working for Norwegian, but via staffing firm Proffice.
"All Proffice employees are now scared, we are no longer employed by an airline. When they say jump, we have to say 'How high?'," a cabin crew member, who wanted to remain anonymous, told The Local. "We are all pissed at the union and the fact that they own shares in the staffing firm makes us feel that they aren't listening to us. It's very frustrating; from year to year they are giving us worse conditions." The cabin crew's union, entitled Unionen, is one of the ten biggest share holders in Proffice, the disgruntled employee noted.  The latest twist, reported in local media over the festive season, was that the move to Proffice cut three days off a month for the former directly employed cabin staff, despite initial promises that all working conditions would remain unchanged. Twelve days off became nine.  Such scenarios have been addressed in a question to the European Commission sent by Swedish Left Part MEP Mikael Gustafsson.  "The Temporary Agency Work Directive (2008/104/EC) entered into force in 2008 and was based on the principle of equal treatment," he wrote in the official letter. "In other words, employees of temporary employment agencies should not have less favourable working conditions than employees in the user enterprise." Gustafsson told The Local he found it regrettable that the EU had introduced a temporary workers directive at all, as staffing firms should be regulated on national not union level, but said the current problem was simply that companies based in Sweden were disregarding the 'equal treatment' clause. In other words, staffing companies should uphold domestic laws and standards. The cabin crew member who spoke with The Local touched on the perceived precarity of being at the mercy of company that could simply ship jobs abroad. The employee summed up a lose-lose paradox: While furious that Unionen had not stopped the transfer of jobs to a third-party staffing company, the cabin crew member said the Swedish union's insistence that all airline staff be covered by its collective bargaining agreement jeopardized the existence of their jobs in the long-term – regardless of the EU temporary workers directive. "Unionen is making this profession leave Sweden. They want everyone in Sweden to have the same collective agreement, but Norwegian is a European airline so our organization has a different structure," the employee told The Local. "Because our union won't let go of this thinking, our jobs are going to go abroad." MEP Gustafsson is now awaiting a reply from the Commission.  "It's a downward spiral. This kind of (staffing behaviour) forces even 'good' companies to behave badly in order just to compete and survive," Gustafsson told The Local.
Representatives at Unionen, meanwhile, have spoken openly about their worries that Norwegian could endanger working conditions. And Rickard Gustaffsson, CEO of Scandinavian airline SAS, one of Norweigian's main competitors, told the Svenska Dagbladet (SvD) newspaper last week that politicians should look into the organizational "grey zone" in which he believed Norwegian was operating. Outsourcing its staff has taken place not only in Stockholm, but also in Bangkok, London, and Malaga, SvD noted this week.
While Norwegian has been widely covered in Nordic and international media as a business success story, with the purchase of new planes and the addition of several long-haul routes in recent months, they have not escaped criticism. Union representatives in the US added their voice to the fray on Thursday.
Edward Wytkind, president of the Transportation Trades Department, AFL-CIO (TTD), a Washington, DC-based labour organization, said Norwegian had already has a track record of leaving workers in the lurch in its quest for lower labour costs. The business model, which he noted was based on having planes on Ireland, staff in Thailand, and owners in Norway – should be criticized, he told the Norwegian news agency NTB.
"It's designed to do one simple thing. Shop the world for the cheapest possible work force," Wytkind said."And to come to the US and shove out employees."