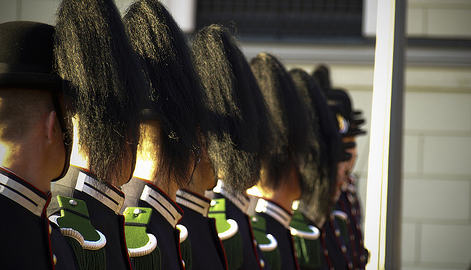 The changing of the guards outside the Royal Palace - Mattias Widmatt
Newly published Excerpts from the daily log books kept at Royal Palace in Oslo,  the Akerhus Palace and the Royal residence at Huseby give a fascinating insight into the life of those tasked with guarding Norway's royals.
"The sentries handle small and large events every day. Most are related to substance abuse and mentally unstable people," Lieutenant Colonel Ole Anders Øie told Gardisten, the regiment's in-house newspaper, which published the log, which was then reproduced in Aftenposten newspaper.
Some of the more striking entries are listed below:
27 January: Four drunken youths causing trouble at the castle. Threatening behaviour, including threats to deprive guard of his gun and shoot everybody.
27 March: Male Person calling guards at the Royal Palace, pretending to be the king
28 March : A group of drunk French men hollering and shouting at the palace guards. No threat.
4 April: Confused person tries repeatedly to get into the castle. Has received a call from the higher powers to meet the King. Dismissed.
27 April: Ejection of scantily clad dancers from Palace Square.
25
June: A man and a woman dismissed from the Akershus fortress after having sex in the area.
19 August: Mentally unstable people on Palace Square. One wants to deliver a letter to the king.
1 September: Ongoing birth outside the camp guard at Huseby. Guardsmen assist….