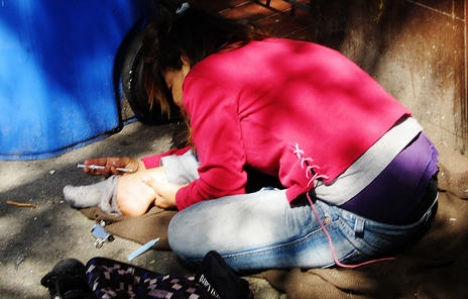 A woman injecting heroin on the streets of Vancouver, Canada - Flickr
"The solution has been tested in several large cities in Europe, such as Amsterdam and Zurich. We intend to have the same general approach," Ola Jøsendal, director of addiction medicine at Haukeland University Hospital, told the Bergens Avisen newspaper.
Jøsendal on Tuesday announced the hospital's plan at a meeting of Bergen's city council, and will now apply to the country' health ministry to start a pilot scheme.
"Really heavily addicted users have no desire to stop using opiates, and will continue anyway," Jøsendal told the paper. "This consumption can be made much safer".
He said the hospital aimed to set up an injection room next to the accident and emergency department by September next year.
"This would be a treatment for a small number of patients who do not respond to treatment with ordinary Medically assisted Treatment (MAT) drugs," he said.
Bergen has the most visible problem with heroin addiction in Norway, with addicts clearly visible buying and consuming heroin in the Nygårdsparken.
The city council in September announced plans to temporarily close down the park, causing many to warn that addicts would simply be pushed into the streets of the nearby city centre.