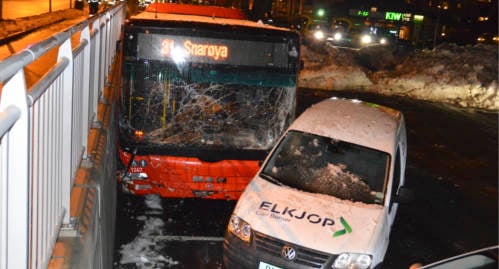 Traffic accident on Carl Berners Plass Saturday night. One person is dead and three are bruised. Photo: Fredrik Hove / NTB Scanpix
"The driver was constantly aboard the bus, she was alone and sat in the driver's seat all the way," Knut Torgersen, from the Oslo police told Dagbladet newspaper.
He said that police would not know what caused the accident until they questioned the woman later on Monday.
A man in his 30s was killed, and three others were injured, none of them seriously. The bus only came to a halt after it crashed into some parked cars.
The accident was one of two serious bus incidents to take place on Sunday. Two more died earlier in the evening when a bus from Lillehammer slipped off the road on arrival in Oslo, tumbling some 20 metres down a hill before rolling to a halt.