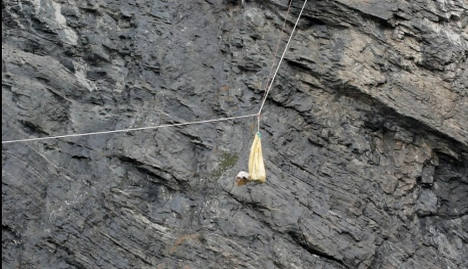 Natalia the goat travels down by 'funicular' - Pascale Baudonnel
A second goat which remains stuck on the mountain may have to be shot if a way cannot be found to bring it down.
Hendrik Lapp, a climbing teacher at Sogndal Folk High School, and his students, on Sunday abseiled 70 metres  down from a mountain summit to the place where the two goats, called Natalia and Birka, were stuck.
The operation can be seen in a picture gallery here.
After successfully coaxing Natalia over with food, Lapp strapped her into a canvas carry bag, and sent her down on a pulley to a boat waiting on the Aurlandsfjord below.
"They took a rope down to the fjord — like a cable car in Switzerland — and they sent the goat down by that rope," David Underdal, the farmer's son, told The Local. "They had a boat out in the fjord, pulling the rope out so that it didn’t hit the goat against the mountain."
Underdal, whose farmer mother Pascale Baudonnel came to Norway from France 30 years ago, said she could not understand how the goat had got out onto the cliff.
"It’s the same area where we keep them every year," he said  "But this time, they managed to walk out onto this cliff. We can’t quite work out how they did it, but it must have been quite perilous."
Underdal said that the climbers had screwed a pathway of bolts into the mountainside in order to reach the goats, but had still not been able to reach the spot where Birka remained.
"The reason she's still up there is that she didn’t want to come to the climbers. If she had wanted to be saved, she would have been down by now," he said.
"Birka was right out on the other side of the cliff. She didn’t move a metre in the hours they were up there and they couldn’t climb out to her. They took Natalie down and then they had to abort because it got too dark."
He said his mother had yet to decide what to do about the remaining goat.
"The alternatives are either to come up with an idea to save it, or to shoot it, but to do that you have to be quite sure that the fjord is completely clear," he said.
"It’s not so fun, the second alternative, but it’s better than her starving up there."
Lapp became personally involved on the weekend, after his students tried and failed to rescue the goats.
Underdal said that her mother found the situation distressing.
"She's not crying about it or anything, but she's quite close to the animals. All of them have names and the one that’s still up there is quite a good goat for genetics. She’s one of our better goats for milk and heritage." 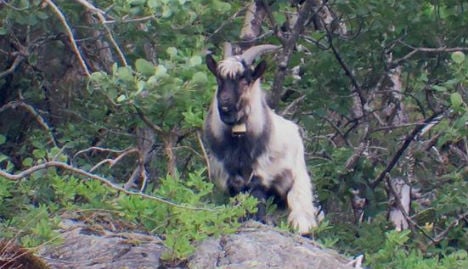 GOAT
Police called in to cool down randy billy goat 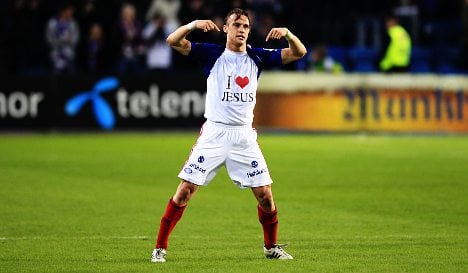