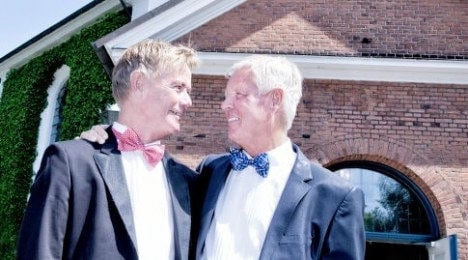 Danish travel entrepreneur Stig Elling married his long-term partner Steen Andersen in June 2012
Per Lønning and Fredrik Grønningsæter, the former bishops of Fredrikstad and Bodø respectively, said they had no choice but to resign their membership of the Norwegian Association of Clergy, which represents 95 percent of the country's priests.
"I am very disappointed and I have no other way to respond but by resigning my membership after 62 years, and four years as chairman," Grønningsæter said on Friday.
Norway's bishops announced in October that they would not  open the way for gay couples to marry in church when they meet for their synod in April, instead offering to give church blessings to civil unions.
The Norwegian Association of Clergy on Wednesday issued a statement attacking the logic of the bishops' decision, saying they should instead begin drawing up a liturgy for gay weddings at next year's synod.