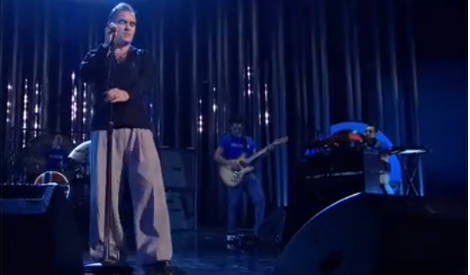 Morrissey performing at the Nobel Peace Prize Concert - Screen Grab from NRK
Many Norwegians were surprised and upset by the choice of the former Smiths frontman as headline act for the concert, because of insensitive comments he made after the twin attacks mounted by far-right terrorist Anders Breivik in 2011.
Just a few days after the massacre, Morrissey introduced the song 'Meat is Murder' at a concert in Warsaw saying the killings were "nothing compared to what happens in McDonald’s and Kentucky Fried shit every day."
But when he kicked off his performance with the 2011 song 'People are the same everywhere',  however, the social media buzz was instead about his trousers.
"Congratulations on your trousers then, asshole," wrote VGTV presenter Einar Tørnquist on micro-blogging site Twitter.
"I hope an angry punk band called 'Trousers to Morrissey' was launched this evening," tweeted Tarjei Strøm, the drummer for Norwegian electro-rock band Datarock.
Morrissey steered well clear of controversy throughout the concert. After deciding not to show up for the pre-concert press conference, he came on stage with nothing but a "good evening" to the audience, and said little throughout the set until he left with a simple "thank you".
The singer followed up with a cover of "Satellite of Love", by the US singer-songwriter Lou Reed, who died last month and was one of the singers major influences.
Morrissey rounded off his performance with  "Irish Blood, English Heart", from the 2004 album "You Are the Quarry".
The band's drum kit was emblazoned with the Norwegian flag, and the rest of the band all sported T-shirts with the word "Hustler" on them.