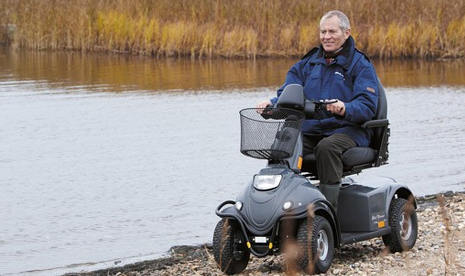 A Mini Crosser similar to the one confiscated by the police in Norway - Orange Badge Mobility Services
Thor Geir Benjaminsen (20), who suffers from Emery-Dreifuss muscular dystrophy and relies on a Mini Crosser wheelchair for even short journeys, was forced to take a blood test after he was flagged down by a police car on his way home.
"I noticed a huge police car with blue lights driving right up behind me shouting "Stop!"," he told VG newspaper. "They draged me out of the wheelchair, after which I sliped a little on the ice, and fell to the ground, and then they asked me who I had stolen the wheelchair from."
Benjaminsen admitted that he had been drunk when he was stopped, but stressed that as his wheelchair has a maximum speed of 10km/hr he did not think he had done anything dangerous.
"I was no danger of anyone apart than myself," he said.  "It is worse to drive a lawnmower while intoxicated."
Police drove him home, leaving him the keys to the wheelchair and telling him where they had left it.  When he asked them to pick it up for him, however, they refused, telling him that he was still under investigation for stealing it.