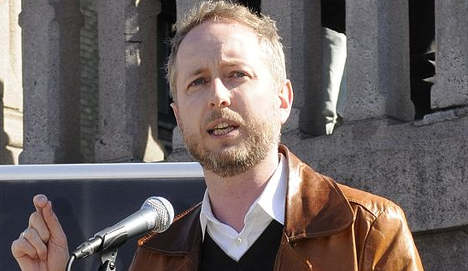 Bård Vegard Solhjell at a 2010 campaign against Norway's Data Retention Directive. Photo: Tommy Gildseth
"The Progress Party went a long way in supporting the apartheid regime, Bård Vegard Solhjell, the deputy leader of Norway's Socialist Left party, said on Friday. "I urge Progress to admit that they were wrong, and call on them to apologize for the attitude they had to South Africa."
"Nelson Mandela was perhaps the world's greatest freedom fighter, and Norway did a lot to help end the apartheid regime,"  But FRP was skeptical of many of the policies and FRP went a long way in supporting the apartheid regime, says Solhjell.
He pointed to allegations that the apartheid regime maintained close relations with the Progress Party, even contributing funding to the 1973 election campaign of the Anders Lange Party (ALP), one of its forerunners.
"This could be wrong, but Progress should open its archives and allow historians to consider these allegations," Solhjell said.
Eschel Rhoodie, the apartheid regime's chief spin doctor in the 1970s, claimed to have funded the ALP in the early 1970s.
"We funded Lange's party so they could launch a weekly newspaper. Then we gave them more money so that he was able to run a good campaign in the elections of that year (1973)," he wrote in his 1983 autobiography The Real Information Scandal.