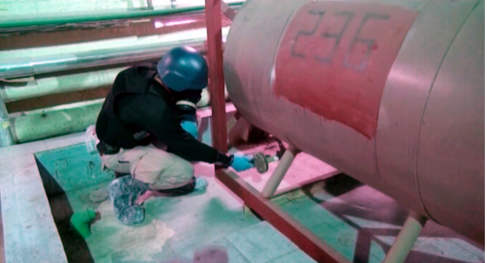 OPCW at work in Syria. Photo: Syria TV
A road map adopted earlier this month by the Organization for the Prohibition of Chemical Weapons to rid Syria of its chemical stockpile, says "priority" weapons have to be removed from the country by December 31st.
"This may not be possible perhaps because of the technical issues that we have encountered," OPCW director Ahmet Uzumcu said on arrival in Oslo, where he will on Tuesday receive the Nobel Peace Prize on behalf of his organization. "But… a few days delay wouldn't be much from my point of view."
Despite the possible hold-up, Uzumcu said he was "confident that we will be able to meet the deadline of June 2014 to destroy all chemical weapons in Syria".
President Bashar al-Assad agreed to get rid of his regime's chemical stockpile as part of a US-Russia deal that headed off possible US military strikes after a deadly chemical attack in August. In total, 1,290 tons of chemical weapons, ingredients and precursors are to be destroyed.
On October 22nd the Norwegian Nobel committee named the OPCW as its 2013 peace laureate for its role in dismantling chemical weapons.
The award came as all eyes were on Syria after a nerve gas attack killed hundreds on the outskirts of Damascus on August 21st.
With 190 so-called State Parties, the Hague-based OPCW is seen as a rare example of successful global disarmament.