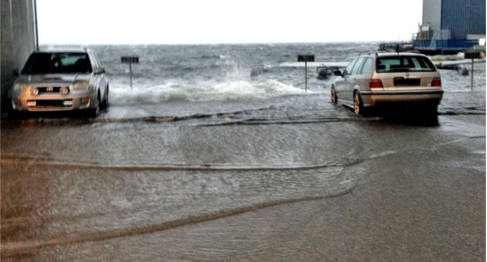 The storm hits Norway's West Coast. Photo: Storm.no Facebook site
Police closed most of Stavanger to traffic at 4pm, as flying roof tiles and other detritus made it dangerous for them to operate in the area.
Meanwhile a 40m metal tower collapsed at a shipyard outside Bergen, while at another shipyard, a woman was trapped inside a building, unable to leave for several hours because of the severity of the weather outside.
At 3pm, local police in Haugaland near Stavanger warned all people in the coastal region to stay indoors and avoid all travel.
"People must keep themselves indoors," it said in a statement over Twitter. "If possible, stay where you are. Avoid travelling on roads, and especially bridges."
The woman trapped at the Georgernes shipyard at Nordnes in Bergen, was rescued at 3pm by the emergency services.
"It is too stormy. I cannot go in or out. The waves are coming up to the windows," she told Bergens Tidende before help arrived.
The wind hit 32 metres per second at Utsira in Rogaland at 2pm, enough to be categorized as hurricane strength.
In Oslofjord, the water level was 50cm higher than normal on Thursday morning, raising the risk of flooding in the capital.
Norway's Meteorological Institute has yet to  class the storm as 'extreme',  meaning it has not yet been given a name.
If the storm, which has been called Sven in neighbouring Sweden, is eventually named, it will be given a boy's name beginning with "I".
Suggestions for the name on the Facebook page for the website Storm.no include Ivar, Inge, Isak, and Ivan.
Below are some videos posted on YouTube and pictures posted on Instagram and Twitter by people in south-west Norway: